A Brief History of Montessori Education

Maria Montessori, the founder of Montessori education, was born in Chiaravalle, Italy, on August 31, 1870. Both of her parents were well-educated, and Montessori proved to be an excellent student with a strong independent spirit. At the age of thirteen, she entered the first of two technical schools—generally considered off-limits to girls—where she studied math, science, and languages, excelling in all her studies. 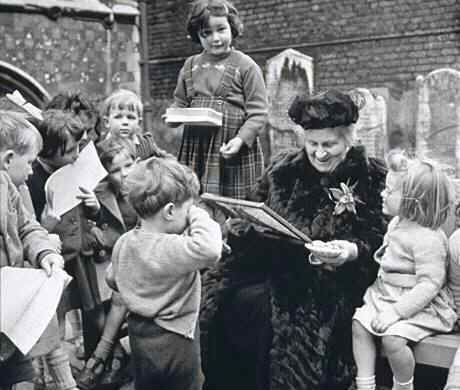 Her technical school experience whetted her appetite for the biological sciences, and in 1890, she applied to medical school at the University of Rome but was denied entrance because she was a woman. She enrolled in the university anyway, studying physics, math, and science, and eventually—perhaps because of her amazing academic performance—she was allowed to study medicine. When she was awarded her medical degree in 1896, she became the first female doctor in Italy.

As a member of the University of Rome’s psychiatry clinic, she began visiting the city’s insane asylums, where she took a particular interest in the plight of mentally disabled children, who were typically kept in bare rooms devoid of any sensory stimulation. She began to study them, reading everything she could find on the subject and attending additional university courses in anthropology, philosophy, and pedagogy. She also studied the work of two early eighteenth century French education reformers, Jean-Marc Itard and Edouard Séguin. Itard had developed a method of sensory-based education, which Séguin later elaborated, emphasizing respect for the child and creating educational materials designed to develop sensory perceptions and fine motor skills in young children.

In 1898, Montessori was appointed co-director of the Orthophrenic School, an experimental institution for children with a wide range of mental disorders. She worked with the children during the day and wrote notes and observations by night, and began developing the hands-on learning materials that would become icons of her method. Her unconventional approach was put to the test when she had several of her eight-year-old “defective” students take the state reading exam. They not only passed, but scored above average, shocking the education establishment.

Her growing reputation led a group of wealthy bankers to invite her to open a school in a low-income housing development in Rome. The bankers wanted to keep the housing project’s children from destroying the property while their parents were at work during the day, but Montessori had other ideas—namely, seeing whether her ideas could improve the situation of children living in poverty. She saw herself not just as an educator, but as part of a larger movement of social reform.

The first “Casa dei Bambini,” or Children’s House, was opened in the San Lorenzo district of Rome in January 1907. By this time, Montessori’s unique philosophy of education was beginning to take a coherent shape, influenced by Itard and Séguin, her experience at the Orthophrenic School, and her studies in philosophy, pedagogy, and anthropology. At the center of her approach was respect for the child. “What really makes a teacher is love for the human child,” she said.

The prevailing wisdom of the day was that children were “blank slates” who could only learn through direct instruction from an adult or older child. Montessori, by contrast, believed that children had an inner capacity to learn and explore—and, in fact, were driven to do so. The task of the educator, then, was to nurture this inner potential, carefully observing each child and providing him or her with tasks that would help him or her to acquire knowledge and skills appropriate for his or her developmental stage. Montessori said that when children are provided with appropriate materials in a calm, orderly environment, they do not need to be forced to learn; indeed, they are eager to learn.

In contrast to a typical classroom, in which all the students must pay close attention to the teacher, Montessori asserted that it is the teacher who must pay close attention to each of the students. And that is just what she did at her newly opened Children’s House, as she continued to develop her understanding of the way children learn. She offered her students a wide range of carefully designed activities and materials, keeping only those that engaged the children’s interest and proved helpful in teaching a particular concept or skill.

The materials—wooden counting rods, sandpaper letters, wooden geometric shapes, and so on—were designed to be self-correcting. For instance, a child might be asked to build a tower from wooden blocks of varying sizes, placing the largest on the bottom and the smallest on the top. The activity challenges the young child to discriminate objects of different sizes, and is self-correcting by virtue of the fact that placing the blocks in the wrong order creates a visual interruption of the smooth line that is created when the task is completed successfully.

Montessori described activity in the Children’s House in this way:

There are forty little beings—from three to seven years old, each one intent on his own work. One is going through the exercises for the senses; one is doing an arithmetical exercise; one is handling the letters, one is drawing, one is fastening and unfastening the pieces of cloth on one of our little wooden frames, still another is dusting. Some are seated at tables, some on rugs on the floor. There are muffled sounds of objects lightly moved about, of children tiptoeing. Once in a while comes a cry of joy only partly repressed, “Teacher! Teacher!” and eager call, “Look! See what I’ve done.” But as a rule there is entire absorption in the work in hand.

The teacher moves quietly about, goes to any child who calls her, supervising operations in such a way that anyone who needs her finds her at his elbow, and whoever does not need her is not reminded of her existence.

Once again, her work met with phenomenal success; within a few short years, new Children’s Houses were popping up all over Italy and the Italian-speaking portion of Switzerland. A 1911 article in McClure’s magazine (at the time one of the leading magazines in the United States) hailed her Montessori as an educational “wonder-worker” and her students as “miracle children.” The article sparked intense interest among progressive social reformers of the era, including such luminaries as Alexander Graham Bell and Thomas Edison, and soon Montessori schools were taking root across the United States, with more than one hundred established by 1917.

By 1929, Montessori had established an organization to help promote her method, the Association Montessori Internationale, based in Barcelona, Spain. However, the rise of fascism across Europe disrupted her work. In 1933, the Nazis closed all German Montessori schools and burned her books. Italian Montessori schools were also shuttered after she refused to allow them to participate in Mussolini’s fascist youth movement. When civil war broke out in Spain, Montessori and her son (and his family) fled to England, then the Netherlands.

In 1939, Montessori and her son were on a three-month trip to India for the purpose of training teachers; however, with the onset of World War II, they were detained by the Indian government because of their Italian citizenship. While under house arrest, Montessori had the opportunity to meet leading Indian intellectuals, including Ghandi. Her wartime experience in India led her to incorporate into her philosophy of education an emphasis on peace and the connections between all living things. Montessori was nominated for the Nobel Peace Prize three times. “Averting war is the work of politicians; establishing peace is the work of educators,” she said, speaking to the United Nations on the topic of “Education and Peace.”

Montessori died on May 6, 1952. At the time, the movement she had founded in 1907 had fallen out of favor, and was virtually nonexistent in the United States. However, the Montessori method experienced a revival in the United States after Dr. Nancy McCormick Rambusch, an expert in early childhood education, began to advocate for it. She opened two Montessori schools, helped found the American Montessori Society, and wrote a book, Learning How to Learn: An American Approach to Montessori. Those efforts, profiled in a May 1961 article in Time magazine, sparked renewed interest in the Montessori method on a scale similar to the response to the 1911 McClure’s magazine article.

Today, there are more than four thousand Montessori schools in the United States, with thousands more worldwide. The exact number is difficult to quantify; “Montessori” is not a trademark, and can be used by any institution, regardless of whether it actually follows the principles of Montessori education. But the impact of Montessori’s ideas is not limited to the schools that bear her name. Many of her ideas have been incorporated into the educational mainstream. As the Washington Post wrote in a recent article, “a strong body of evidence in developmental psychology supports Montessori’s major conclusions—among them, that there is a close relationship between movement and cognition, that the best learning is active and that order is beneficial for children” (“Montessori, Now 100, Goes Mainstream”).

Several recent studies have provided more solid evidence of the effectiveness of Montessori education, prompting leaders in the field of business innovation to tout it in publications ranging from The Wall Street Journal to the Harvard Business Review.

You can find those articles, plus links to recent studies, on our Links to Montessori Resources page. Or, read about the history of Montessori at the links provided below.